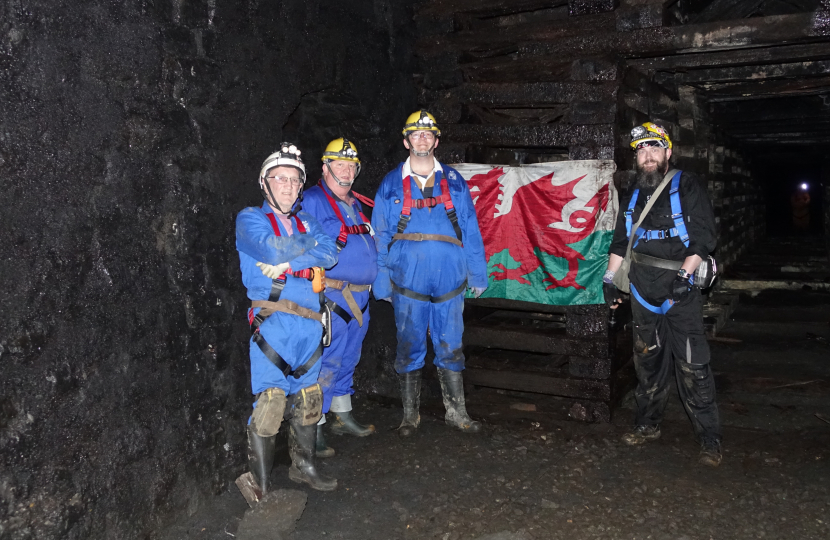 The tunnel, which historically connected the Rhonnda and Afan valleys, has not been used since the 1960s, but with the efforts of The Rhondda Tunnel Society, there is hope that the tunnel can have a new lease of life and be reopened as a cycle lane.

During the site visit, Joel heard how The Rhonnda Tunnel Society hope to repurpose the tunnel into the longest underground cycle lane in Europe and provide a tourist attraction for the area. Joel firmly agrees that opening this tunnel as a cycle route, which could also house various exhibitions, would be a green and innovative way of not only connecting communities in Rhonnda but would also create jobs and boost local tourism.

Joel traded his suit and tie for safety boots and overalls for a walk through tunnel and saw first-hand just why reopening this tunnel would be of huge significance to the area. The scenic landscape around the Rhondda and Afan valleys is also very popular with the local community and having a cycle route through such a historic tunnel would provide such an extraordinary experience that people would undoubtedly want to visit and explore the area further, it also opens up further possibilities for tourist attractions such as mountain bike trails.

Speaking after the visit, Joel said:

“Creating the longest underground cycle lane in Europe, would bring much needed investment and tourism to Rhonnda and I applaud the Rhonnda Tunnel Society for their tireless effort to develop this idea from a dream into reality.”

Phil Catlin from Subterreanea Britannica said the Rhondda tunnel is the best preserved disused railway tunnel that he has seen throughout Britain and Europe –“a crime that it is still buried”.

The project will cost an estimated £13m pounds, a reasonable figure for a project of this kind. It is thought that the tunnel would not only bring much needed investment to several of the most deprived areas in South Wales Central, but would also promote physical and mental health by encouraging local people to pursue exercise and outdoor activities.

For more information about the campaign, please visit: