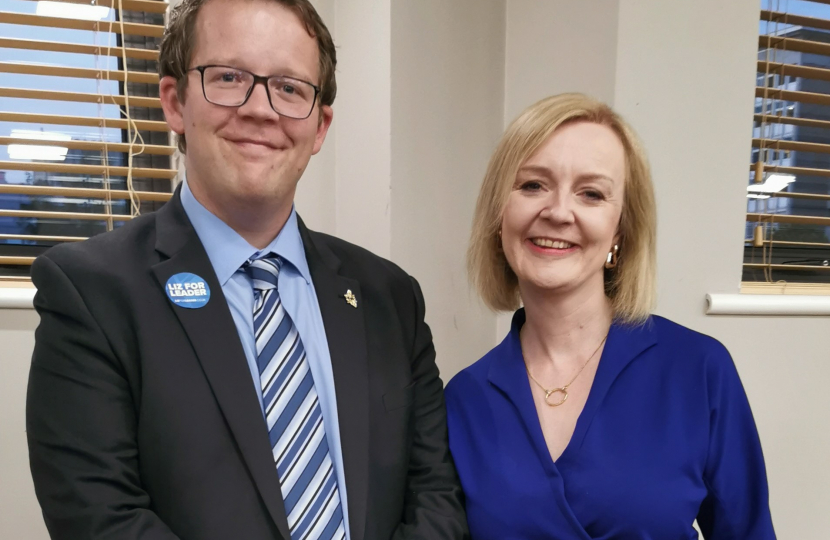 Being Prime Minister is the toughest job in Britain and Joel is confident that our new Prime Minister will be able to tackle the recent pressure on the cost of living due to the war in Ukraine and take immediate action.

Like Joel, Liz Truss is a strong believer in our union of nations and understands we are stronger together and weaker when we are divided. As Mark Drakeford is showing himself to be ‘indy-curious’, Liz Truss has taken firm leadership in protecting the union.

Labour’s plans of increasing tax is entirely counterproductive, because historically it is true to say that tax cuts have in fact generated more income for the Treasury as companies and individuals have had more money to invest helping them to create more business and more jobs. Truss' commitment to tax cuts will ensure that millions of businesses and individuals can tackle inflation and give them more spending power to grow the economy.

As we tackle the problems our country faces, Joel looks forward to working with the Prime Minister and developing a stronger partnership between 10 Downing Street and the Welsh Conservatives.

‘’Liz Truss has got to work straight away by taking action on energy bills and action on energy security to support households and businesses by capping energy bills at £2,500 for the next two-years. The Prime Minister has also set a long-term goal of the UK becoming a net exporter for energy by 2040 which will keep energy prices low’’.

‘’Labour’s plan to pay to tackle the cost of living is unfunded and targeting profits is misguided. The majority of the £170bn of revenue that Labour claim energy companies are generating is offshore and thus unable to be taxed by the UK Government. This shows Labour’s inability to understand business and how they are using this to stoke anti-business feeling at a time when we need more investment into our energy security’’.

‘’I look forward to hearing more about the Prime Minister’s plan for Britain and building a lasting relationship with her’’.

In the Press: Joel James MS on agriculture and Labour's Tourism Tax

It was brilliant to attend the Vale of Glamorgan Agricultural Show after its two-year hiatus, and it was particularly reassuring to see such high attendance and excitement for the Show from local farmers, people from urban areas, and tourists.