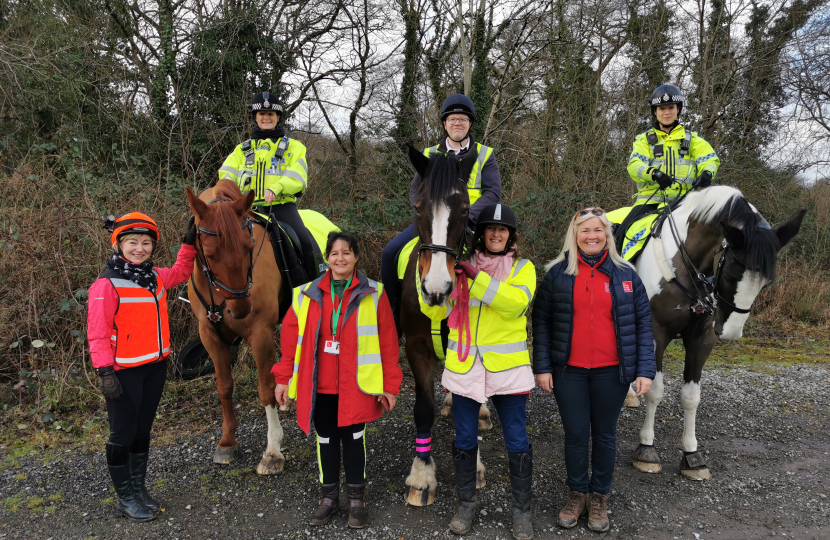 The British Horse Society last week took Joel James MS to Coed Ely in RCT to show how the Welsh Government's Active Travel Plans are having a serious impact on horse riders who use the route.

Active Travel is a flagship policy by Welsh Government designed to change the way we travel in Wales. The purpose is to encourage more people to cycle and walk, especially to their place of work. The plans, being implemented by Local Authorities have had mixed reviews. While some disused routes are now coming back into service and better quality road services are being made available for cyclists using the designated cycle lanes, there are groups who are disproportionality affected.

Horse riders are being pushed onto highways in order to access routes because some bridleways have been downgraded preventing access. Only 22% of public access routes in Wales are bridleways, and, in some places barriers have been put up stopping horses accessing the route and resurfacing with tarmac has made the surface slippery for horses whilst allowing cyclists to travel at increased speeds.

In today’s ride around Coed Ely, Joel witnessed for himself how dangerous the route has become when horses are forced onto roads. There are many dangers for horses which pedestrians and vehicles users do not necessarily see. Cars, vans and lorries travelling at high speeds is the most obvious, but there are also dangers from cyclists who approach horses very quietly and the local school children who can get excited and spook horses.

Moreover, the dualling of road the in Coed Ely has effectively cut horse riders off from reaching adjoining localities, and riders now have a perilous ride along the road if they want to access Garth Maelwg forestry which then leads onto an array of registered bridleways.

The Active Travel Plan hasn’t just affect horse riders, those who suffer sight loss have been also been affected. On Newport Road and Dumfries Place in Cardiff for example, the bus stop now opens onto a new cycle lane, which is hugely problematic and dangerous for those who suffer sight loss and use guide dogs. Because the kerb has been removed, it is very difficult for visually impaired people to determine where they are, and there is nothing stopping them from just walking down the cycle lane into oncoming traffic.

Joel commented after his ride:

“I can clearly see how these Active Travel Plans are hurting the horse riding community. It is obvious that their needs are not being considered by Local Authorities and that is unfair. Particularly since horse riding is active travel, it helps people exercise and travel between locations. I know some people in parts of Wales still use a horse to commute, and having a high quality bridleway network is a massive bonus for equestrian tourism. I also know there are pubs and hotels in South Wales that provide specifically for horses and their riders”.

“More worryingly however is how these Active Travel Plans are making travel dangerous. Horse riders using roads is perilous because cars and vans etc are travelling far too fast. Look at the awful accident in Tonyrefail a few weeks ago that left a horse rider needing a blood transfusion and 8 hours of surgery and a horse with very serious injuries”.

“For those with sight loss, the introduction of cycle lanes without kerbs next to the pavement is very worrying and it is only a matter of time before there is a serious collision”.

“I have asked the First Minister, in the Senedd Chamber about what considerations the government has given for the negative consequences of the active travel plans, and he understands that a review will be carried out at the end of 2022, which in my mind is too late because many of the new active travel routes would have already been implemented."